In a “classic” video conference, each participant sends a video and audio stream to each of the other participants according to this model: 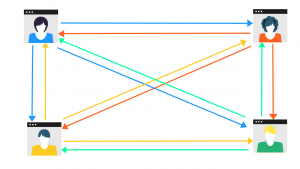 When the number of participants is limited (usually up to about 4), the quality of the call is good; however, if the list of participants grows, the bandwidth becomes more and more saturated and the quality of the communication degrades. This “bandwidth” (BP) represents the amount of information that can be transmitted simultaneously over the network. The more powerful the connection, the higher the BP.

In a typical video conference, the bandwidth of each participant is divided according to the number of streams he sends and receives. For example, during an exchange between 4 people, each BP will be divided by 3 to send 3 streams: 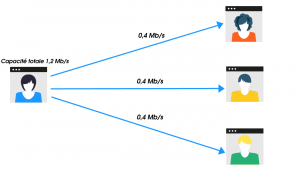 Thus, it is enough for one of the participants to have a bad connection (e.g.: a phone in 3G) or for many people to be connected to degrade the quality of the videoconference until it becomes unusable.

A problem can also occur during the reception of the streams. Indeed, the maximum capacity of the bandwidth limits the amount of information that participants can receive. As shown in the diagram, if the BP of a participant is 1.2 Mb/s and the sum of the streams he receives exceeds this 1.2 Mb/s (here 1.2 + 0.7 + 0.9 = 2.8 Mb/s), then the image will be “pixelated” and the audio will be of poor quality, making communication impossible. 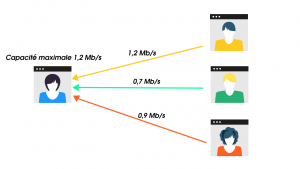 To deal with this problem, Blastream uses a server that centralizes the streams to obtain a single transmission and reception stream for each participant: 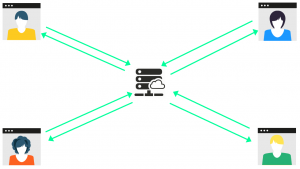 This way, bandwidth is not divided and maximum quality is preserved: 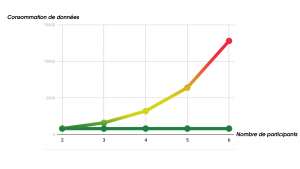 In addition, the Blastream technology is equipped with an autobitrate that automatically adjusts the quality of the upstream and downstream streams (sent/received). This ensures a stable and smooth conference, even when a participant has a variable connection, such as a smartphone connected to 3G.

We use cookies on our website to give you the most relevant experience by remembering your preferences and repeat visits. By clicking “Accept All”, you consent to the use of ALL the cookies. However, you may visit "Cookie Settings" to provide a controlled consent.
Cookie SettingsAccept All
Manage consent

This website uses cookies to improve your experience while you navigate through the website. Out of these, the cookies that are categorized as necessary are stored on your browser as they are essential for the working of basic functionalities of the website. We also use third-party cookies that help us analyze and understand how you use this website. These cookies will be stored in your browser only with your consent. You also have the option to opt-out of these cookies. But opting out of some of these cookies may affect your browsing experience.
SAVE & ACCEPT